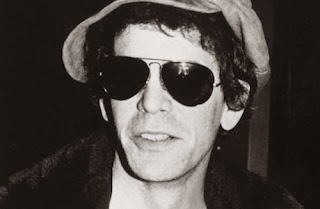 It was with great sadness that I learned that Lou Reed died. I certainly was not ready for it because we all thought he was doing quite well after undergoing a recent liver transplant. How quickly things can change.

I first came upon his music because of his inclusion on the Times Square soundtrack. I purchased it some time in the early eighties from a discount bin at my local Canadian Tire store. I bought it mainly because it had a song by the Ramones. After listening to it all the way through, my second favourite track on it became Walk On The Wild Side even though I could only begin to know what he was singing about. I guess it was his cool spoken street vibe that attracted me. That same vibe permeates Sweet Jane, Vicious and Dirty Boulevard and so many more.

In high school I discovered the Velvet Underground through an older friend and was completely enthralled by their sound, a mix of experimental noise, soft melody and pop hooks. Lyrically, it was pretty dark stuff for a pre-punk generation. A couple years after Beatlemania and before flower power, these dressed-in-black gaunt New Yorkers were singing about drug addiction, sadomasochism and street life. They did not sell a lot of records at the time but their influence on future generations cannot be overstated.

After the Velvets, Reed embarked on an amazing solo career that was peppered with some great albums such as Transformer (1972), Berlin (1973), Rock 'n' Roll Animal (1974), Metal Machine Music (1975) and New York (1989). His body of work has directly impacted countless punk, alternative and indie rock bands from the past four and half decades and his songs have been recorded by a multitude of artists including David Bowie, REM, the Vibrators, Big Star, U2, Mott The Hoople, the Runaways and the Cowboy Junkies.

He was sometimes a curmudgeon and usually a crank. He was one of the best songwriters of his era.