No Funswick Fest, a new 3 day punk festival, promises 6 shows and 25 bands including appearances from groups as far away as Texas, New York, Ontario, Quebec and Gunningsville. The dates are July 10, 11 and 12.

After a lengthy hiatus, Which Witch Is Which, featuring PJ Dunphy (ex-Monoxides) and Dan Cadera (ex- Dead Fucks) seem to be up and rehearsing again with new vocalist Kaity Young.

Moncton's shaggy haired garage rock trio the Disasterbaters have been recording and are planning on a three song 7" record according to drummer Billy LeBlanc. We can't wait to hear the results.

Warsick, Moncton's purveyors of "noise not music" have just released a 3 song 7" flexi of fast pummeling d-beat. They also managed to go on a five day mini-tour. Good work lads. 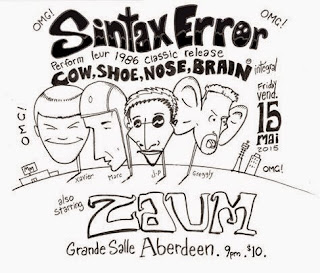 Following in the footsteps of so many vintage bands, Sintax Error have decided to perform their classic 1986 "cow, shoe, nose, brain" debut cassette in its entirety on Friday May 15 at the Aberdeen Cultural Center. Also on the bill are drone doom rockers Zaum, Jealousy Mountain Duo (from Germany) and a solo sitar set by Marc Thériault.

Speaking of Zaum, the boys have been touring relentlessly. After finishing yet another European jaunt, they are now finishing a cross-country Canadian tour. We applaud your work ethic.

After rather dismal attendance and an identity crisis of sorts, last year's city sanctioned Codiac Music Festival, which featured local mainstream musical acts, has re-branded itself as Mud City Meltdown. Organizers have so far booked the legendary Voivod (Montréal) as headliners as well as Zaum, Hard Charger (Fredericton), Back Yard Devils, The Cauldron Project, Fear Agent, The Adhesives and Eastcoast Love Story while promising much more. Festival dates are July 22 until July 26.

After what seems like an eternity, vintage punk/bubblegum/mockers Nerve Button are planning to lay down some tracks next month. Hopefully a vinyl release will be the result of their labour.

The kids from the Claude's House all-ages venue have branched out and are now booking shows at the SNAFU Pub on the east end of St. George Street. From what I hear, it's been hassle-free and the drinks are cheap.

Nathan Sanford, former guitarist/vocalist with the Mean, who gave up guitars for 4x4 Jeep riding for the past few years, has been manufacturing his own guitar pickups as well as jamming with Impulse Items vocalist Daniel Bourque. Could be interesting.

And lastly, we wish Denis Marquette (Bad Luck #13, Room 201 Records) a happy belated 60th birthday. His recent birthday bash at the Chris Rock Tavern was attended by an assorted crew from Moncton's rock and roll underground scene. If one had been an astute observer, one could have spotted members of such acts as Earth AD, Monoxides, Soaring Sirens, Bad Luck #13, Idea of North, Marky and the Mopeds, The Robins and Purple Knight.