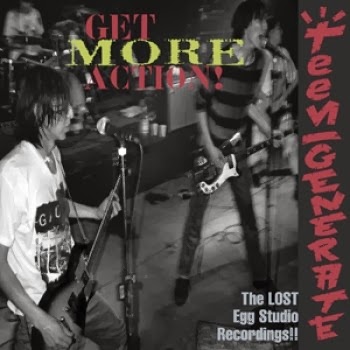 Teengenerate - Get More Action LP (Crypt)
In 1995, the Ramones changed my life. (Hey! I’m 29, ya dick! )
Like most Ramones fans, nothing ever came close to matching how I felt when I first heard Rocket To Russia. Growing up in Millville Cape Breton Nova Scotia, hearing contemporary garage punk bands along with peers of the Ramones proved to be a task…but a fun task! For the next 5 years, that and baseball took up most of my time.
So when me and 3 other like-minded folks started our first band The Teenage Hurricanes, we already knew how we wanted to sound . Combine the ferocity of First Four Years Black Flag with the rant and raving vocal style of the MC5, blow out everything like Iggys remixed Raw Power, and do it with the Johnny Ramone meets Chuck Berry  guitar style of the first Teenage Head and Real Kids albums. The fact that none of us could really play wasn't a concern.
Our first allages show, we played for about 7 people...4 of which  were the touring band from Vancouver called the Nasty On. After the show, the first thing they said to us was “You guys sound like Teengenerate!”. I thought he was talking about the Dictators.
He then said, again, “Dude! TEENGENERATE, from Japan!”.
We already liked  NewbombTurks and Guitarwolf…but  Teengenerate? A day later we checked them out.
That was summer of 2003. We were already around 18-19...definitely late bloomers to Teengenerate…a band who’s heyday was around the same period we were just discovering Punk Rock.
But if there’s one band that could match how I felt upon first hearing Rocket To Russia, it was Teengenerate.  Our singer Rob ordered Smash Hits as soon as he could. It was like a reassurance that you could get away with being a sloppy mess just as long as you surpassed your lack of musicianship with energy and enthusiasm.  THAT’S rock’n’roll!
So what is “Get More Action”? It’s something like this…(and correct me if I’m wrong).
When it came time to record Get Action in 1994, Teengenerate chose Egg Studios in Seattle. After the recording was done, either the band or Tim Warren (who knows at this point) decided that it wasn’t “Teengenerate” enough, and the band should re-record it again. So, Teengenerate went back to Japan, and re-recorded the album on a 4 track with every instrument bleeding into the other. THAT was Get Action…a nuclear fuckin blast to the eardrums to anyone cool enough (or perhaps, dumb enough) to sit through it!
Well maybe I’m a gullible idiot, but when I read that these Egg Studio recordings were the lost 1994 CLEAN versions of what ended up as Get Action, I forgot which band I was reading about for a moment. CLEAN? Wait now, it’s fucking Teengenerate!
If I never read “recorded at Egg Studios”, I never would’ve guessed this was recorded in a Studio.
Get More Action is just as blown out as any Teengenerate recording they’ve ever done.
It’s not necessarily  “better”. Just different.  I think Finks vocal delivery was better on Get Action, but there are certain parts on “Get More Action” I definitely prefer.... including a killer version of “Radio 55”. With a  slower tempo and poppier solo, it proves  that underneath all that muck, noise and speed, Teengenerate could craft incredible pop songs…which makes it no surprise that later on, members split into more Power-Pop influenced groups like the Tweezers,  Raydios, and then Firestarter.
Other things of notice….”She’s so Fine” is now in the Key of A, “Fake fake fake” has a chorus where they actually say “Fake fake fake”,  and there’s two killer unreleased tracks…”Teenage Freak” and “Untitled” the latter of which sounds like an updated version of “the American rules” from their first 10’’ Audio Recording.
The packaging also has killer photos, complimented with liner notes from Eric Davidson.
With this release, combined with an upcoming documentary, maybe Teengenerate will finally get the attention they deserve.....although I highly doubt they give a shit.  (TB) 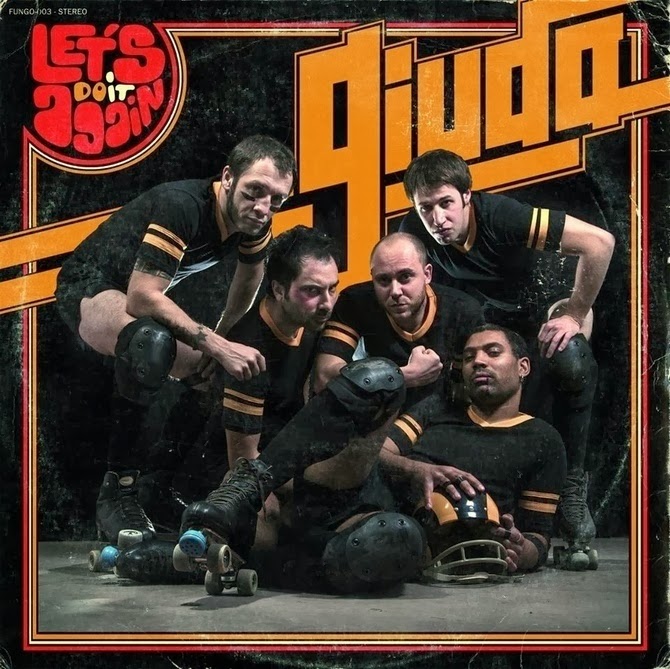 GIUDA - Let's Do It Again LP (Damaged Goods)
" All right, it’s 9am and I’m gonna try and write this review by 9:15am. Here we go!
Depending on which two assholes you’re arguing with online, Taxi were either Italy's greatest punk export since Pizza, or you know, NOT that (I’m like the Jim Belushi of metaphors. Or is that a simile? ) .
I disliked Taxi when I first heard them. It’s not that I hated them, I was just expecting the band to sound like a Killed By Death band…or the Dictators…or the Vibrators…you know, how they were described in their fuckin PRESS RELEASE.
Anyways, they sounded like none of those bands. Taxi sounded more like a Glam influenced Oi Band to these ears (no need to point out that MOST Oi was heavily glam influenced, I’m rushin here). Once I came to that and accepted it though, I started to like Taxi a lot more.)
So why did I waste your time talking about Taxi? (Or A taxi? Did I even mention yet that I’m talking about a band CALLED Taxi, and not an actual Taxi Cab?)
Well Giuda consists of the Guitarist and Vocalist of Taxi....and to describe how Giuda sounded on their 2010 album Racey Roller…I would describe it as “Taxi with a Gary Glitter stomp beat.”  Better yet, if Taxi were glammed up Oi, then Giuda are Oi’d up Glam. …but to take things further, they REALLY embrace the glam thing. The recording style is right out of 1974, the album and 7’’art rips off the imagery and graphics of Hector and Sweet, Slade, Mud.....oops, did I say “rip off”? I meant to say “pays homage to”.
Even better, it was released on an American label so it didn’t cost us Canucks an arm and a leg to order it….unlikeeee! (Get ready for this…I’m ACTUALLY about to review their new album!)
LETS DO IT AGAIN! The new album of Giuda! Currently ONLY available as an import! Well ain’t that a kick to the Soccer balls!
Giuda were a 4 piece on Racey Roller. They’re now a 5 piece, and the extra guitar work has added a HUGE boost to their overall sound.  And holy shit the soccer influence….how did I not realize that “Number 10” (from Racey Roller) was about a soccer player?
“Lets Do It Again” really makes me wish I didn’t think Soccer was the most boring sport on the planet after American Football. “Get The Goal” is my favourite here, followed by “Wild Tiger Woman”, and the killer instrumental “Roller Skates Rule, Ok”. Oh, and if you can’t figure out which two Sweet songs “Teenage Rebel” is a cross between, then you can stop reading this……although I REALLYYYY wasted your time at this point.
This is a party album.  But I swear, if I attend your party and there’s a soccer game on in the background, I will NOT be happy. In fact, I’ll switch it to a Hockey game, then review your party and give it the WORST review ever.
PS- It’s 10am now, and I forgot to say that I LOVE THE NEW GIUDA ALBUM. BUY IT NOW."
(TB)