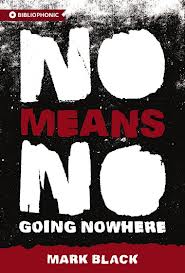 With all the recent activity in the publishing world dedicated to Canadian punk, it was only a matter of time before the subject of NoMeansNo would be tackled. Halifax author Mark Black presents us with a nice little book that differs greatly from the works of popular Canadian punk biographer Chris Walters in that he dissects the lyrics and analyses the songs through a deeply personal point of view. In fact, we seem to learn almost as much about the author as we do about the band as he interjects with personal anecdotes and reflection throughout this work.
For the uninitiated, NoMeansNo are one of Canada's most eclectic and diverse musical acts as well as one of the most respected. They are without a doubt a product of punk rock, yet they defy easy categorization as they often utilize elements of funk, jazz, hardcore, minimalism and progressive rock.
Black, who is still a young man, was introduced to the band in the 1990's when NoMeansNo were already bona fide legends of underground music. It is the author's youth and lack of first hand knowledge of the glory days that makes this an interesting and refreshing read. He looks at the band's early days aided by countless quotes from band members, acquaintances, peers as well as old published interviews. The amount of ink given to former guitarist Andy Kerr and current axeman Tom Holliston is impressive and appreciated. Historically, most of the written word dedicated to this band tends to be focused solely on founding members John and Rob Wright. Oh, and yes, there is plenty of Hanson Brothers material here as well.  (RA)