Eric Neurotic and his better half Ilisha French (both from Feral Trash) are back in town after spending a couple of years in Ottawa. This rock and roll couple have remained steadily involved with music during their stay in the nation's capital so we should see recordings by both Chiller and Cheap Whine on vinyl sometime soon. It seems that both bands will try to continue despite having members currently living in both Ottawa and Moncton. Bonne chance mes amis.

Speaking of Eric Neurotic, it has come to our attention that American pop-punkers Teenage Bottlerocket have recorded a version of one of his tunes entitled The Way I Know, originally recorded by the Varsity Weirdos. It will appear on the group's forthcoming album Stealing The Covers to be released in June 2017 on the Fat Wreck label. 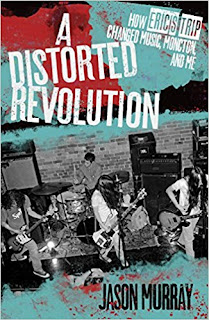 A Distorted Revolution is a new book/memoir by Jason Murray that follows the rise of Eric's Trip and the local alternative grunge rock explosion of the 1990's. The author is a Monctonian and was part of the same skateboard scene that included Chris and Rick from Eric's Trip. The book is published by Nimbus and is due out on May 30, 2017

They're baaack! Despite announcing their final show back in November 2016, Sintax Error recently performed at Le Coude on the Université de Moncton campus. Is this a midlife crisis? Who cares? We're happy to have them playing again.

Warsick, the city's crust/d-beat ambassadors have just finished recording a new album's worth of material and are heading off on tour to Ontario and back starting in early May. There will be a limited cassette version of the album available on tour with plans to release it on vinyl when they get back.

As reported back in January, Which Witch Is Which have a new vocalist. We can now confirm that her name is Lysanne Lombard and that band are finally in the process of recording. We cannot wait to hear the results. 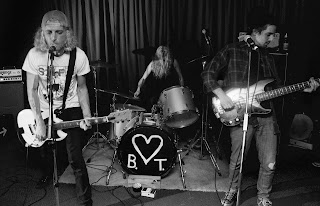 Bummertown is a new band comprised of members of Dirty Kills, East Coast Love Story and Deamons. They have wasted no time as they are hitting the road for the whole month of May. They should also have a 5 song 10" EP just in time for their road trip.

Impulse Items, perhaps this city's most underrated punk band, are playing a one-off reunion show on May 5 at Claude's House opening for The Famines (Montreal).

Zaum, our favourite doom/mantra merchants, are currently on their upteenth European Tour. By all accounts, things are going well and they should be home soon.

Quality Block Party is a Saint-John music festival spearheaded by Fredericton native and former manager to the stars Peter Rowan. It takes place between April 26 - April 30 and will feature some very cool music from all over New Brunswick, but we're primarily concerned with Moncton content, so please look out for and enjoy the following: Nerve Button, The Galpines, Last Museum, The Disasterbaters, Paranerd, Tampa and Superlove.